Staff Selection Commission of India (SSC) has released SSC CGL 2017-18 Tier-III Result and Cut-Off. The exam for SSC CGL 2017-18 was conducted on 8th July 2018 in various centres all over the country. As per Notice of the Examination, the merit has been prepared on overall performance in Tier-I, Tier-II and Tier-III. However, the candidate will need to qualify all the Tiers i.e. Tier-I, Tier-II and Tier-III separately.

Cut-Off Marks are listed below: 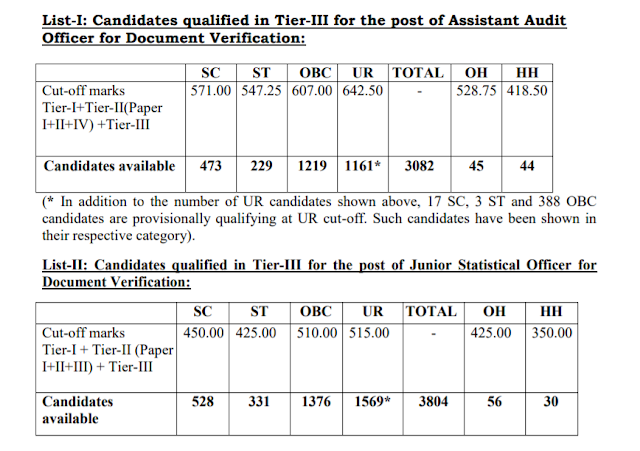 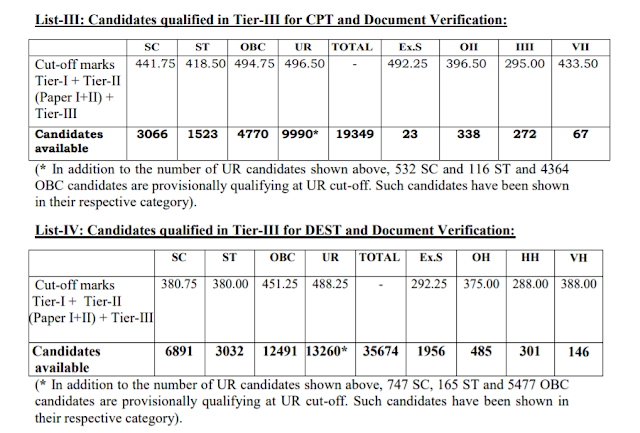 In case you are looking for the link of all PDFs, here it is:
Write Up
AAO Qualified candidate List
Candidate Qualified for the post of J.S.O
Candidates QUALIFIED FOR DOCUMENT VERIFICATION & C.P.T

Keeping the increasing cutoffs in mind, you should not leave any stone unturned for SSC CGL 2018. In this post, We are providing you a quiz comprising Most Expected GK question for SSC CGL Exam 2018. Just take this test and judge your preparation level.

Read the following passage carefully and choose the most appropriate answer to the question out of the four alternatives.


A classless society, however, does not mean a society without leaders. It means rather one in which every citizen becomes for the first time eligible for leadership, if he has the power to lead. It means a society in which every one is given, as far as possible, the chance to develop this power by the widest diffusion of educational opportunities in the broadest sense, and by keeping the career wide open to talents of every useful kind. It is often said that a community of equals will not allow itself to be led. But in fact, most men are, in most things, very willing to be led, and more in danger of giving their leaders too much than too little authority, especially if they are free to choose them, and assured that the leaders cannot exploit them for personal economic advantage; leadership, so far from disappearing, will come into its own in a truly democratic society. But it is likely to be a more diffused leadership than we are used to; for a better-nurtured people will have more citizens with strong wills and minds of their own, wishful to lead; some in politics, some in industry, and some in professions and arts of life.

This is the idea of a classless society. Some will reject it as contrary to their interest, some as utopian and against 'Human nature,' for there are some who deny, indeed if not in word, that the aim of society should be to promote the greatest happiness and welfare of the greatest number and others who hold, with pessimistic honesty, that most men must be driven and not led.

Read the following passage carefully and choose the most appropriate answer to the question out of the four alternatives.

Great books do not spring from something accidental in the great men who write them. They are the effluence of their very core, the expression of the life itself of the authors. And literature cannot be said to have served its true purpose until it has been translated into the actual life of him who reads. It is the vast reservoir of true ideas and emotions. In a world deprived of literature, the broad, the noble, the generous would tend to disappear and life would be correspondingly degraded, because the wrong idea and the petty emotion would never feel the upward pull of the ideas and emotions of genius. Only by conceiving a society without literature can it be clearly realised that the function of literature is to raise the plain towards the top level of the peaks. Literature exist so that where a man has lived finely, ten thousands may afterwards live finely. it is a means of life, it concerns the living essence.

We have already provided some Maths Quizzes for SSC CGL Exam. If you want to check those quizzes, click on below given links:

We have already provided some Maths Quizzes for SSC CGL Exam. If you want to check those quizzes, click on below given links:

SSC CGL Tier-1 2017 was conducted from 5th August to 24th August 2017 in computer based mode. In its earlier notice, SSC had said that the Tentative Answer key will be released on 18th September 2017. However, They have surprised everyone by releasing the answer key today. Here is the official notice. 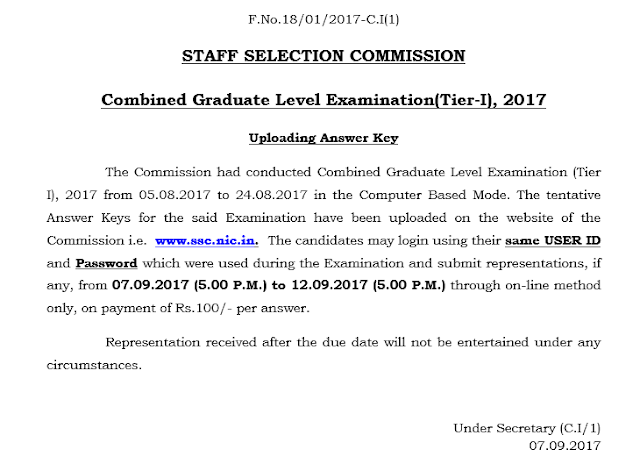 How to Check your answer Key? 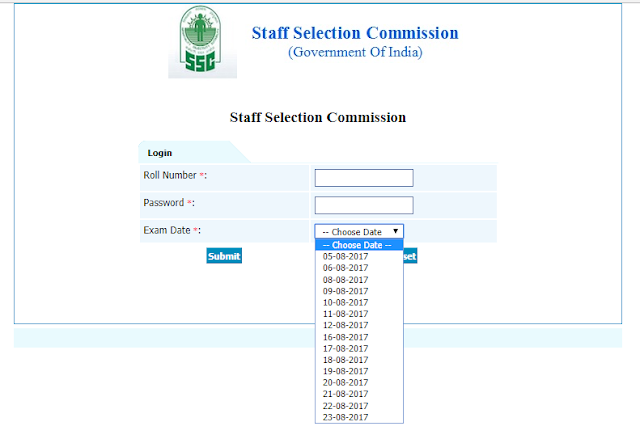 Check your Answer key and don't forget to share your marks. All the Best!

SSC has notified that it will release the Answer key of SSC CGL Tier-1 2017 on 18th September 2017. As per their notice, a total of 15,43,962 candidates actually appeared in this exam which was conducted in 43 batches.

The image of that Notice is attached below. For official File- Click Here 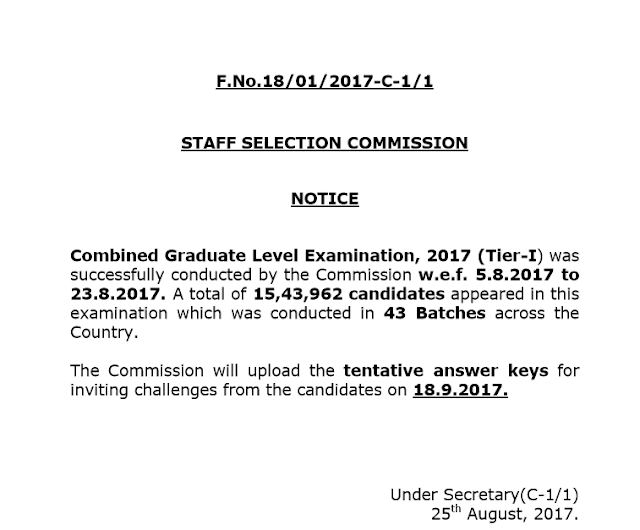 The SSC CGL Tier I exam is over. As per Staff Selection Commission, they have Successfully conducted CGL Tier-1 exam from 5th August to 23rd August 2017. Now, Most of you must be looking for expected cut-off. Right?

So, Let's first analyze the paper. We will predict the cut off after comparing the difficulty level with last year. So. Let's Begin. 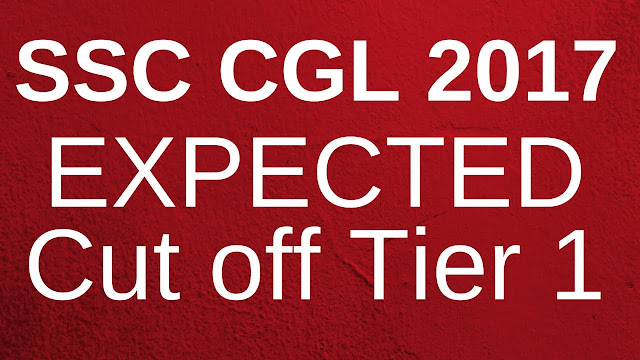 The Difficulty level of this section was almost same in all shift. Most of the students found this section pretty easy.
SSC CGL Tier 1 2017: General Awareness

In this section, the difficulty level varied across all days. The level of questions was difficult in earlier shifts but it kept decreasing in later shifts. However, Students found many irregularities in topics. In many shifts, 2-3 Questions were asked from Geometry section as well whereas in many other shifts, Not even a single question was asked from this section. In last few days, Questions were asked even from coordinate geometry whereas the question of Reflection was a bit new to aspirants.

This section surprised students because we saw some major changes in it. Questions from Narration, Voices and Cloze Test were also asked this year. However, The level of this section was similar across all the shifts which were moderate to difficult. In last 4-5 shifts, the passage was also asked.The level of Vocabulary was good.


If you are getting more marks than our Expected-Cut Off Marks, You should start preparing for Tier-2 without wasting your time. Do not wait for the Result. Last year, The level of Tier-2 Exam was quite Good. We are expecting even better level this year. So, Be ready for that.

SSC Doesn't believe in Normalization. So, If you are participating in debates related to it on Social Media, You are just wasting your time.

As you already know, The final result of SSC CGL 2016 has been declared. We are providing you Category-Wise Cut-Off marks for all posts. If you are preparing for SSC CGL 2017, You should definitely check the cutOff marks as it will help you to set your target for your dream job.

ASO in Ministry of Railways

ASO in Ministry of External Affairs

As you already know, SSC CGL Tier-1 will be conducted from 5th August 2017 to 24th August 2017. SSC has published an official instruction manual for CGL aspirants. We are listing those Instructions. You can download the official File from Here.

CANDIDATES ARE STRICTLY ADVISED TO DESIST FROM BRINGING BAGS, MOBILE PHONES AND PROHIBITED ITEMS INTO THE EXAMINATION VENUE.

In this Post, We are sharing the SSC CGL Tier-1 2016 All Sets Question Paper with Answer in PDF format. The best part is, You will find all of 43 sets at one place. Click below-given links to download them. 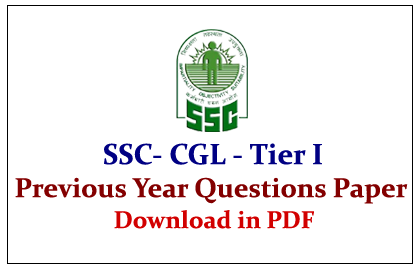 Staff Selection Commission has announced the dates for the Verification of Documents of SSC CHSL 2015 Exam. Its result was declared a few days ago. The Document Verification dates for various regions are listed below: 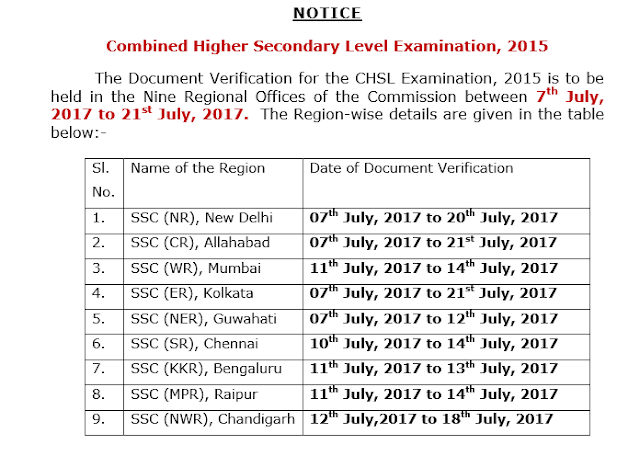 GK section will be the decider in SSC CGL Tier-1 2017. It can make or break your chances of clearing SSC CGL 2017 this year. So, Do not take this section lightly. This quiz has 10 mixed questios from different subjects like History, Geography, Physics, Chemistry etc. So, Participate in this Quiz and evaluate your preparation level.

You can also participate in our other quizzes by clicking on below given links:

Maths Quiz for SSC CGL 2017 with Solution and Explanation

Maths is a scoring paper in SSC CGL. Many students score more than 190 out of 200 in Tier-2 that help them grab their dream job.

To help you perform better in this section, we are providing you a Maths Quiz for SSC CGL 2017. This quiz comprises 10 questions. Try to solve these questions as fast as you can.

We will keep posting more Maths quizzes for SSC CGL Exam. So, keep visiting us.


We have already provided some Maths Quizzes for SSC CGL Exam. If you want to check those quizzes, click on below given links: